I confess, from the moment I saw the teaser trailer for “Tangled“, I wanted to see it. Even though it’s a Disney cartoon (their last one had me frothing around the mouth) and even though it’s based on Rapunzel (which is one of the most annoying fairy tales because of the snivelling mess that is the girl called Rapunzel), I still wanted to watch the film. Why? I don’t know. Maybe it’s just an abiding love for fairy tales or happy endings; maybe it’s a sign that my brain is turning to grey ooze because of the Mills & Boon I read. Who knows? Fact is that after a critical ten days away from what passes for civilization, the first film I saw was “Tangled”. 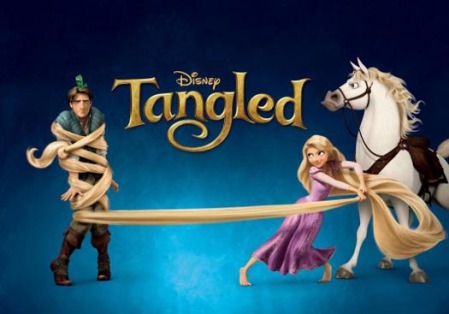 And it was fun! No, I’m not crooning any of the songs but my teeth are intact and I didn’t want to murder anyone while watching it. The hero had clever lines and Eugene Fitzherbert is a superb name. There were some hilarious side characters, like the hulks in The Snuggly Duckling, which, incidentally, is a most excellent name for a pub. My favourite thug was the massive one with a Viking hat who collects miniature ceramic unicorns. So cute! The hook-handed concert pianist wasn’t bad either. Then there were the two supporting actors, Maximus the Horse and Pascal the Chameleon. Maximus, in particular, is a star. I love him. Single-mindedly snorting his way through the countryside in his hunt for the thief Flynn Rider, a.k.a. Eugene Fitzherbert, Maximus is a prince among horses. The evil stepmother was properly evil and truly cunning. The way she nursed fears in Rapunzel was actually pretty darn chilling. In the actual fairy tale, you wonder what the hell is wrong with Rapunzel that she’s taking all this crap from the  crone. In “Tangled”, it made sense, because Rapunzel didn’t just meekly take it and, most importantly, the old woman’s ploys to keep Rapunzel in the tower are a twisted version of the anxieties that most parents probably feel so it almost feels logical. It’s interesting to see the view of parenthood that “Tangled” offers. Parents want to protect their young because the children are the future. A child, in many ways, keeps their parents alive; not just through memories but also because they carry in them bits of the people who created them. It’s a kind of convoluted attempt at immortality of a non-corporeal variety. Then you have Gothel in “Tangled”, the evil crone, who has incarcerated Rapunzel in a tower in order to keep her safe from harm. Except Gothel wants Rapunzel to be safe because  there’s magic in Rapunzel’s hair that keeps Gothel young so it is much more selfish than the parent who dreams that their kid will live out the parent’s dream but only just. And it’s dark, which is a quality that Pixar stories often have despite the adorableness of the animation (John Lasseter did after all act as the executive producer on this film). I wouldn’t describe it as one of my favourite films of the year as Quentin Tarantino did but it was good. Who’d have thunk?