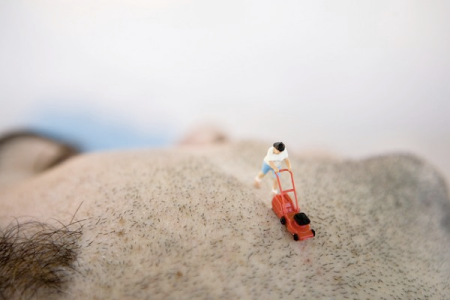 I just finished watching “Restrepo“, the Oscar-nominated documentary by Sebastian Junger and Tim Hetherington, which is brilliant but also far from uplifting as experiences go (might write about it later, if I can rustle up the energy). So to cheer myself up, I started waffling around on the internet and came across the work of Vincent Bousserez. Bousserez basically places little plastic figures in sets made up of normal-sized objects. It’s like a twist on “Gulliver’s Travels”. Instead of Gulliver going to Lilliput, the Lilliputians are in our world. There’s a mini Nabokov painting the wings of butterflies that are ten times his size, rifle-bearing soldiers standing guard around a woman’s nipple, men in protective gear investigating some Brie, a man pushing a lawnmower over a stubbly jaw and much, much more. Adorable, adorable stuff.

Bousserez’s Plastic Life series reminded me of Slinkachu’s Little People project, which is also totally charming. I’ve been a fan of the Little People since I discovered the project about five years ago. Slinkachu would take his “little people” and sets, install them in public spaces and then photograph them. Very cool stuff. In addition to the cute factor that comes with miniatures, Bousserez’s stuff is also often wicked (unlike Slinkachu’s). There are couples going at it doggy style on apples, miniature Boys’ Scouts climbing out of someone’s bottom… the set-ups are frequently hilarious.

You can see Bousserez’s stuff here.

One thought on “Small World”