Some months ago, Mamata Banerjee won the West Bengal elections with a thumping majority and the Communist Party of India (Marxist) virtually disappeared from a state that was once considered its stronghold. Banerjee’s success should have been an example of how an insignificant figure can take on Frankenstein proportions if one mishandles the public relations aspect of government. This woman is known for yelling mindlessly, mismanaging the Indian Railways (she was the minister for Railways), force feeding people her cooking, allying with the guerilla forces (known as the Maoists) in rural Bengal and being shrill enough to force Tata to abandon its plans of setting up a manufacturing plant in Bengal. Everyone cheered and voted for her, not because anyone thought she would be a good leader but because everyone was sick of the CPI(M) and because the CPI(M) worked extra hard to appear even more idiotic than Banerjee. That’s quite an achievement but they managed. As a result, the entire electorate brought a woman with seriously dodgy governing credentials into power. We live in hope that she will prove to be smarter and more capable than she’s taken to be. 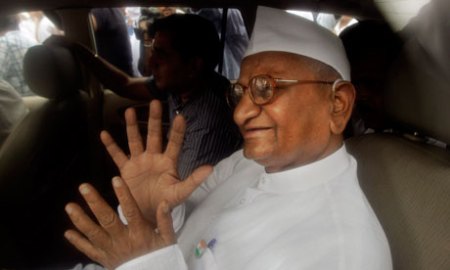 Given one of Banerjee’s allies was and is the Congress Party, which is in power and currently running the country, you’d think the senior politicians in the Congress would recognise the power of mass frustration and be careful in their handling of this emotion. But no. On August 16, the government made an utter ass of itself when it decided to let anti-corruption activist Kisan Baburao “Anna” Hazare be detained by the police. Hazare had gone to Delhi with the intention of undertaking a fast unto death from August 16, hoping to force the government to accept the very problematic anti-corruption Jan Lok Pal bill. However, when the police picked Hazare and his followers up, Hazare had not even begun his fast. The detention/arrest smacked of strong-arming rather than any sense of responsibility towards Delhi’s law and order.

Then, to compound matters, a magistrate sent Hazare to Tihar Jail, which is generally where serious criminals (like murderers and high-profile scamsters) are sent. Before you could say “Anna”, Hazare supporters from all over the country were planning peaceful protest gatherings and Hazare had declared this to be India’s second Independence struggle. Opposing political parties are accusing the government of murdering democracy. The government had more egg on its face than Pamela Anderson has silicone in her breasts. It tried to backpedal by releasing Hazare but Hazare refused to leave Tihar Jail. Instead, he made little video recordings in which he said things like, “I’m in Tihar. My supporters, keep fighting the good fight out there.” He said he wanted to begin his fast in Tihar (UPDATE: He’s actually beginning his fast today, on August 19, once he leaves Tihar). All possibility of redemption was lost when government spokespeople (wrongly) accused Hazare of corruption and the prime minister subtly hinted Hazare was being funded by foreign forces  that wish to dismantle India’s democracy. Meanwhile, matching all this stupidity and madness, were the Hazare supporters who roared things like “TIHAR IS OUR TAHRIR!” for the benefit of television news cameras.

There are a number of things suggested by this precis of past events.

3. The Congress Party is full of stonkingly juvenile twits.

4. Our middle classes, for all their frustration, are embarrassingly foolish.

It’s point 4 that worries me. There is every reason for the average Indian to be angry. In fact, it’s a miracle that it’s taken this long for the rage to bubble up to the surface. There have been a lot of improvements and development in India in recent times but this country is nowhere near being on the right track. We the middle classes (middle middle, lower middle and even upper middle) work hard, we pay taxes, we try to do everything that is required of us and yet there is barely anything that works for us. Basic infrastructure, like roads, water and electricity, barely exist. Local transport is a nightmare. Travelling within the country is fraught with danger if you go by rail or road. Living costs are stupendously high in a city like Mumbai and even in small towns, it rises sharply with every passing month. Almost nothing works unless you have a middleman to ease your way. There’s no system that you can rely upon. There are no role models from whom you can take inspiration. The jobs are disappearing. The Reserve Bank of India is raising interest rates. You can’t trust the politicians you’ve voted into power to look out for you because they’re busy looking after themselves. And this is in urban areas.

Then you see the fat cats. Ministers and political minions make millions in bribes. The elite get more elitist. Popular media, from films to advertisements, urge you to aspire for things you can’t afford. In the news, you hear about people swindling the country of millions of rupees that should have gone into giving you a better life. Of course we’re pissed off. 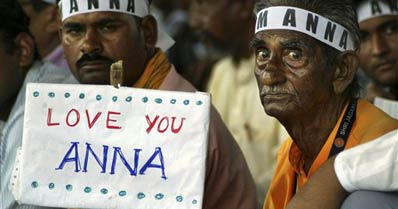 How likely is it that these guys have read the text of the Jan Lok Pal Bill? (Photo nicked from India Today)

However, no matter how justified this disillusionment may be, a dangerously autocratic anti-corruption bill is not the answer. Neither is Tihar Jail our Tahrir Square. We are not in a dictatorship (so far). Our government isn’t oppressive the way, for instance, the Syrian regime is or Hosni Mubarak’s Egypt was. If it was, then one wouldn’t be able to chant these slogans. Funnily enough, it doesn’t strike anyone that if you’re able to publicly declare that your right to self-expression is being stifled then nothing of the sort is being done to said right. Activists have been ignored in India (for instance, the North East is full of stories of stifled activists; like this woman who has been on a hunger strike for more than 10 years now) but Hazare doesn’t have that problem. Every news channel has reporters watching him and his supporters.

While it’s quite an achievement to garner the kind of mass following that Hazare has, the man is neither our philosopher king or the 21st century Gandhi. He’s a publicity hound, gleefully arm-twisting the government because he wants something that actually is undemocratic. But for our middle classes — who get a thorough and well-deserved bashing in this article; they and Hazare are being thwacked by many English media journalists in India — it isn’t important to actually find out whom they’re supporting or what he really stands for. We’re pissed off and we want to feel like we’re doing something about it. So we put on our make-up, dress up our kids and land up at a public park where we can scream ourselves hoarse because supporting Hazare gives us a sense of purpose. As though backing his project is building a better future.

Except, of course, it isn’t. The Jan Lok Pal Bill isn’t going to build roads or fix real estate rates. It won’t create jobs and it won’t keep the stock market from wilting. It won’t improve the lot of rural India. What supporting Hazare does is expend the energy that could perhaps be channelled into bringing about some little changes that would make a difference. Like setting up a clean-up drive for your street. Like campaigning to give the garbage collectors better pay and proper, hygienic uniforms. Like carpooling so that there are less cars on the road. But this is frustrating, thankless work. And it’s work. Given how hard we plod to earn salaries, it’s probably much too exhausting to battle the endless obstacles that stand in the way of improving things. Much easier to gather in a park and chant a slogan. Or sit at home and blog about how everyone’s cross-eyed.

I freely admit I don’t know how to bring about any of the changes that are required in this country, not even the tiniest one. My efforts are limited to talking to people who seem bigoted, donating to charities who do work I admire and blogging (which really is preaching to the choir). When I see people like my mother, who risks her health and her life, as she trudges through the guerilla-infested countryside trying to develop schemes that will create some sort of training and employment opportunities that aren’t city-centric, I feel guilty. Because I don’t have her energy or her ability to keep going despite all the problems that shadow her every move. When I see Hazare and his supporters, on the other hand, I feel vaguely relieved that my guilt and frustration haven’t overwhelmed my ability to reason.

6 thoughts on “Protesting Against Protest”