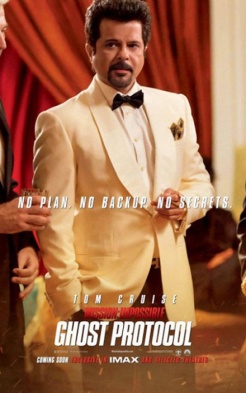 Indian men, every single one of you should be gathering forces and putting out a petition to lynch Anil Kapoor. Because Kapoor has, with just about 5 minutes of screen time, decisively scotched your chances of ever seeming cool. Thanks to Anil Kapoor and “Mission Impossible: Ghost Protocol“, the Indian man has been established as one who thinks he gets a girl by saying something along the lines of, “Indian men are hot, hot. Ya, Indian men are hot. Phwoar.” (“Phwoar” is as close an approximation as I can manage of the sound that Kapoor made.) I’m not even getting into the tackiness of the white tuxedo and a golden tray of mobiles. Or the fact that his pick-up line is offering to show the woman his “art collection”. Unsurprisingly, he gets slapped and beaten up. The entire auditorium cheered when Kapoor got slapped. And I was watching it in Mumbai.

“Mission Impossible: Ghost Protocol” is actually great fun, if you ignore their ridiculous notion of Indian parties. Director Brad Bird has done a super job of his first non-animated feature. It’s funny, it’s got great stunts, Simon Pegg is delightful, there are all sorts of explosions, car chases and crashes. Even Ethan Hunt can’t beat Mumbai traffic, which is something that warmed the cockles of my heart. Basically, it’s everything you expect of a blockbuster spy thriller. It actually reminded me of the good ole pre-Daniel Craig era of James Bond. The film isn’t moody and serious like John Woo’s “Mission Impossible” films. In fact, come to think of it, there’s been something of a reversal — James Bond has gone all slick and serious (like Ethan Hunt used to be) while Ethan Hunt has found a sense of humour (a bit like Bond of yore). There was even an entire bit in Moscow, making Hunt all the more Bond-esque, although Russia isn’t the enemy in 21st century spydom.

Anil Kapoor was the only bit of “Mission Impossible: Ghost Protocol” that was oozing the tacky, cheesiness of old Bond films, and I have a feeling he’s more responsible for that than Bird or the writers. In the bit where Kapoor goes on about Indian men being hot, I have a feeling Bird said, “Anil, just improvise and flirt with her.” And Kapoor went with “Phwoar”. Because I just cannot believe those lines were scripted. No plot points are served by it and I cannot believe that the duo that came up with so many good lines would write “Indian men are hot, hot”. It sounds more like desperate attempts at wish fulfillment to me. All Kapoor achieves is to plunge the tribe of the Indian male into unplumbed depths of embarrassment. This is worse than “birdie num num” because it’s done by an Indian. Naseeruddin Shah as a turbaned and moustachioed Captain Nemo was giggle-inducing but at least he had cool gadgets and I got the distinct impression that Shah did his best to hide himself behind the facial hair. Nemo, however, is positively restrained next to Kapoor’s Brij Nath. The one saving grace is that Kapoor doesn’t have either a head bob or sing-song accent when he speaks English.

Indian men don’t look so good in phoren cinema. I suppose it’s something that they’ve got some presence in Western cinema these days, but I’m not sure it’s a good thing if the only thing they get to be is ridiculous. Take “The Bengali Detective“, a documentary about a private investigator who has a little firm of his own in Kolkata. Rajesh runs the detective firm Always, which handles a variety of cases ranging from finding sellers of spurious goods to unsolved murders. When he and his team aren’t following leads, they dance. Seriously. Rajesh, who looks like a walking rumball, has always had a fascination for dancing. So that’s how he and the boys unwind. They gather for classes with a choreographer and do Bollywood dance steps in all earnestness. They’re quite serious about it. So much so that they enter a television dance competition (something like a Bengali version of “So You Think You Can Dance”). There are some priceless, ridiculous moments in “The Bengali Detective” — who, incidentally, isn’t actually Bengali but a non-Bengali detective in Kolkata — that show Rajesh and the Always boys learning the steps, shopping for their costumes and finally performing. At one point, when the choreographer tells one of the detectives he’s not able to get the moves, he tells the choreographer, “It’s not like I don’t know how to dance. Every disco in this city knows me by name.” It’s the earnestness with which they approach their dancing, which is proper awful, that makes Rajesh and his boys decidedly comic. I cringed. Because you can totally imagine Cox and his crew doing their best to smother their giggles as they shoot Rajesh, looking like Bappi Lahiri’s poor cousin and performing his slinkiest moves.

There are other hilarious moments in “The Bengali Detective”, like when the detectives attend a self-defense class. It’s held out in some park, which somehow just adds to the ridiculousness of it. While on a case, two detectives discuss hair dye brands and highlights. Balancing the laughs are the cases that Rajesh handles and the difficulties he faces at home. “The Bengali Detective” shows a grubby, desperate Kolkata. It isn’t a romantic city. It isn’t the cultural capital. There’s blood on the rail tracks here. Women suffer abusive husbands. Caring husbands are faced with insurmountable odds. Poor people are wrangled by the system. As the miseries of middle- and low-income Kolkata add up, it’s easy to see why director Phil Cox would have savoured Rajesh’s love of dancing. If only Rajesh, with his pot belly and glittery bandana and “shades”, didn’t look so damn ridiculous. It takes some serious tragedy to lessen Rajesh’s aura of silliness. You have to wonder whether Rajesh realised just how laughable he appeared as he struck his poses for Cox’s camera. Rajesh is a great subject for a documentary and “The Bengali Detective” is an interesting watch but it’s also dissatisfying. It feels manipulative and manipulated. We never find out how he became a detective, for instance. The complexities of being a non-Bengali investigating in Bengali Kolkata isn’t explored. Nor do we really understand how he solves his cases. The few scenes showing the detectives at work feel staged and are uninformative. What stays with you is Rajesh’s dancing — you see that process far more lucidly than the investigations. There’s a naïvete about Rajesh that I found a little problematic. He seems to think he’s a good dancer and I kept wondering if he had any idea how this pastime of his was being used by the director. More than his detection, Rajesh’s odder quirks, like dancing, that seem to define him. There’s lots of hard work, but ultimately, he ends up looking decidedly comic.

Apparently, Stephen Frears is adapting “The Bengali Detective”. It’ll be interesting to see what happens to the Indian male when he’s fashioned by Frears. I’m hoping the Bengali detective can give Hercule Poirot a run for his money. If our men must be ridiculous, then they might as well be cute, intelligent and ridiculous. Rather than being more embarrassing and less cute.

4 thoughts on “Men at Work”