OK, so I’m not a kid. But really, “New Hag on the Block” doesn’t have quite the same ring to it.

You know, when I told friends that I’d accepted a job at a newspaper, most of them looked at me with a combination of pity and surprise. One friend told me, “It’s going to be a whole new world, dude. A whole new world.” To which I replied, “Means?” My friend guzzled some beer and said, “You’ll see.”

Here’s what I did see when I found my desk at the new office: 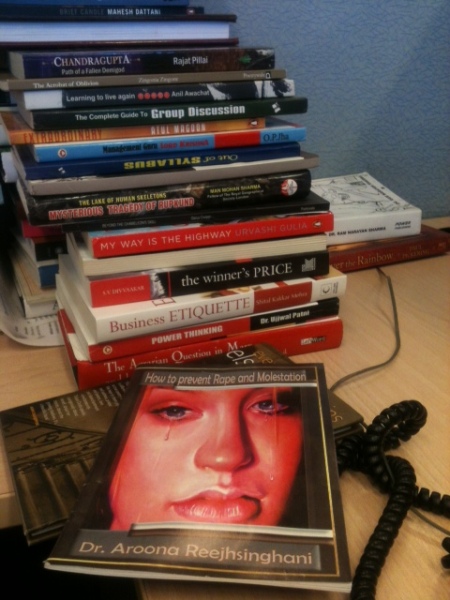 I’m not sure whether I should feel reassured or freaked out. Is this supposed to prepare me for the mood on the floor when we get the pages ready? Should I feel better that at least I have some sort of guidelines/advice? Never having worked in a newspaper before, I’m pretty much clueless about how things work and I wasn’t expecting rape and molestation to be among the things to watch out for, but at least now I have tips on how to deal with eventualities. Which is more than I can say about my knowledge about the potentially less rapey aspects of my job profile.

This publication must only employ clairvoyants because no one seems to want to provide basic information. It’s not that people aren’t friendly. They are. But there does seem to be an assumption that I’m on the same page, which is somewhat wildly off the mark. For example, I’m yet to figure out whether I’m working a 5-day week or a 6-day week. No one’s told me and I felt slightly weird asking about days off before I’ve done any work. One of my favourite moments so far was when the only person I know from HR — the one who negotiated with me — came up to me this morning and asked me if I was settling in ok. I said I was muddling along. She beamed at me, her expression lucidly conveying the fact that she has no idea what “muddling” means. Then she asked me, “So what exactly are you going to do? As in, what is your job?” Fantastic.

In other news, I’ve found the bathroom, the water cooler, a lemon tea dispenser, the coffee machine and figured out how to get food from the pantry. Yesterday was rather frustrating because I’d see these liveried chappies prancing around, carrying trays of food (and fresh fruit juice in beer mugs), but today I know the pantry’s extension number. Now if I can figure out my own extension number, no one can stand between me and dosa and freshly-squeezed watermelon juice. You may imagine me having a “By the power of Grayskull, I have the power” moment.

7 thoughts on “New Kid on the Block”