Ok, I give up. This backlog will never be cleared so I might as well concede defeat. This is me, defeated.

Actually, that was me yesterday, when Mumbai had a freak cloudburst. It was like the Biblical god got very, very angry. There were bombs (not boom. Bomb. It was that loud) of thunder and crazy lightning. I believe a few people were literally struck by lightning. One news report this morning reads, “Officials at the India Meteorological Department attributed the rainfall to prevailing weather conditions.” Really? The rainfall was due to prevailing weather conditions? Who’d have thunk?

Anyway, coming back to my defeat. The chances of me actually getting my act together with the art posts is extremely low. Ok, it’s nil. Why? Because I keep thinking that I need time to write them, which I don’t have because I’m too busy waffling about. Yesterday, once I got home, I was so desperate for procrastination that I turned on the tv and watched The Return of the King and NCIS: Los Angeles. Then there was thunder and lightning and cable went kaput. So I read a Mills & Boon. I am nothing if not dedicated to the cause of wasting my life. But I digress (again). So the point is, I will never get the art posts written up properly. So, I’m going to do them improperly. Better badly done than not done at all — after all, it’s a motto that’s worked for Bollywood and the Times of India. 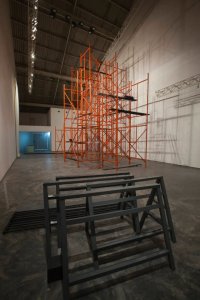 I had a couple of nice photos of this one, but I can’t find them now. Which would be an excellent reason to stall writing this, but I will soldier on nonetheless. Bawa’s first show was a pile of packing boxes, painted grey; a line of white bricks and a yellow/orange line. It was not spectacular, even though she’d told me about the idea behind her work, I’d loved it. Bawa had gone around to all the galleries and asked them to give her the boxes in which they ship works of art. It was, as a friend puts it, meta. The boxes that put out-of-the-box art in a literal box turns into art and is put in the larger box that is the gallery. There was also something rather architectural about it. These boxes were, in a way, the building blocks of the Indian art market. They were key elements in whatever structure there exists in Indian art. Conceptually, it sounded a lot of fun. Visually, it was boring and inaccessible.

With Another Documentation, Bawa focused on the architectural side of things. One of the most common sites in India’s urban spaces is scaffolding. They’re usually made of bamboo. Fancier buildings have metal scaffolding. Bawa brought a piece of scaffolding into the gallery and painted the metal bars orange. On the walls around this massive installation were photos of architectural drawings at construction sites. In a dark corner of the gallery, there was a massive pile of cement sacks, I think. With an orange brick on it. And there was a steel … thing. I’ve no idea what it was. They looked like the skeletons of barricades. The order in which you encountered the works was:

3. two rows of photographs of drawings

6. architectural drawing on wall (I think)

The fun part of the show, for me, was the scaffolding and the photographs. There was a three-dimensional scaffolding, but without a construction site. There’s nothing being built here, but there is the illusion that something could be. It’s also simultaneously precaution and danger, given it’s supposed to make things safer for construction workers but, particularly in India, I’m sure there are thousands of unrecorded injuries and fatalities because someone lost their grip or something terrible like that. The shadows cast by the installation gave the piece a lovely, eerie sense of depth; like there was a shadowy, wraith of buildings waiting to materialise. The resemblance to the old jungle gymnasium in playgrounds — do they even exist anymore? — was also interesting. The construction business certainly does have its share of games and power play. Orange was an interesting colour to use, given we now think of either Guantanamo Bay or right-wing Hindu fundamentalists when we see it. The BJP likes to take credit for having made India prosperous (their infamous India Shining campaign, which was roundly criticised but has stuck in popular memory). In the Indian context, this hollow orange scaffolding was rather political though I’m not sure that Bawa had realised this possible interpretation. There were two-dimensional drawings standing against a three-dimensional construction site and all of this flattened to a photograph.

The rest of it didn’t make much sense to me and more importantly, didn’t catch my eye or make me curious. Quite blah.

Usually, the good intentions of Kulkarni’s work have usually been entirely too earnest and in-your-face for my liking. Often, her works lack subtlety and sophistication. This time, though, Kulkarni managed a neat balance. Working with craftsmen, she designed armour made of cane as well as jewellery made of string and bamboo. (She mentioned all their names and gave them credit. Good on her for doing that.) The show is made up of these outlandish creations that obscure the body and seem vaguely martial. Kulkarni and others wore them and were shot (by Shivani Gupta) in different parts of Mumbai. Kulkarni’s armour force the wearer to move a certain way, they hide the body and make it look different. But for all the power they suggest, they’re also delicate, in their own way, and endearingly ridiculous on occasion. Like this photo. 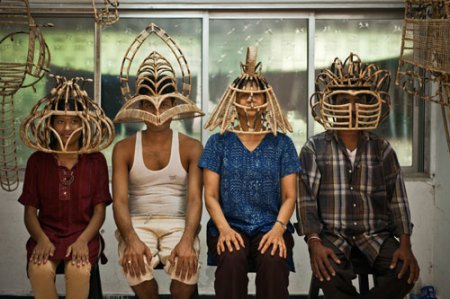 It was a fun, pretty show. Of course, the timing added a layer of grimness. Kulkarni’s show opened soon after a few rather gruesome crimes against women. So these armour became rather poignant, reminding us of the fragile strength of the modernity that is supposed to protect women in cities. There was a performance on the opening night, which was probably quite striking for those who could see it. Being a midget has its disadvantages. I saw fragments of Kulkarni and other performers being dressed in the armour, past and through people’s elbows and wine glasses. Not quite a basis for an opinion. 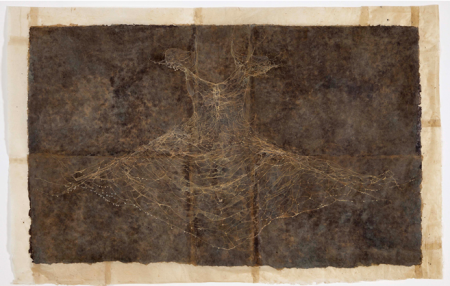 Galerie Mirchandani + Steinruecke is one of those places that doesn’t look for the provocative and the avant-garde. Walk in here, and you’re usually assured a show that will be easy on the eye and not particularly disturbing or thought-provoking. Rarely have they had a show as beautiful as Krishnan’s. Like most good paintings, Krishnan’s work doesn’t look particularly engaging when flattened into a photograph. See them up close, and the texture of the rice paper and the watercolours looks almost like weathered skin. Her use of colours, the lines and intricacy of the works — it was really nice to see a show of paintings that was moving simply for how beautifully and expertly the works were done.

There’s something vaguely Buddhist about the way Krishnan draws people, or maybe it’s just because of the delicate earthy palette and that her characters mostly have their eyes closed a la Buddha. The recurring motifs in her work are lotus leaves, flowers that have sleeping people cocooned in them and spider webs.  The people in the flowers were vaguely reminiscent of The Matrix. One of my favourites was “Frock”. It’s not as dark as it looks in the photo, but the spider web gleams in a ghostly way. The white almost glows and in parts, the colour is thicker than elsewhere, so it gives her wavery lines a strange kind of shimmer. Come close to it, and you can see little spiders scuttling around and droplets of water in which a man’s face is visible (Krishnan’s father).

The paintings in this show are all therapy of sorts as Krishnan dealt with the grief of her father’s passing. She is, I suppose, trying to rise out of it, like the girl coming out of the lotus leaves in one of her paintings. I really liked her smaller works, like the series showing her father with her as a child. There’s something terribly morbid about the contrast between the childhood games and the darkness and spider webs that surround them. There was another series of little paintings of everyday objects. Those were lovely too. 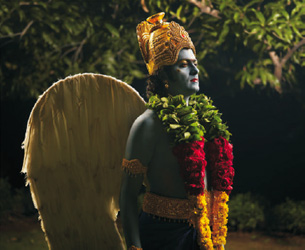 This was deeply disappointing. I’d absolutely loved Valli’s The Definite Incarnate and her series with the school kids in fancy dress against a backdrop was interesting. She’s also done a set of photographs showing how women do their hair. Valli’s photographs, so far, tend to be able to communicate the concepts behind them and at a very basic level, her photographs look good. There’s nothing wrong with how The Visitor looks technically speaking, but it was an utterly forgettable show. While The Definite Incarnate was fun as well as poignant. The blue god in our modern world was beautifully out of place. The way she used the textures, the colours, the sets — it was remarkable. The Visitor looks as lushly produced as The Definite Incarnate, but you have to wonder what’s the point? This was like watching an artist plagiarise themselves. So Vishnu now has a swimming pool with diyas instead of a sea of chaos. Then what? The few shots that did work for me were the ones that showed him as vulnerable, like one in which he’s sprawled on the surface of the pool as though he’s slipped. There was another one that showed two blue gods looking at each other, almost confrontationally. This one could have been fun — maybe if a different Krishna was facing off? Maybe like an anima Krishna? I don’t know. I’m not an artist — but it looked a bit like a shot from a jatra. Also, for some reason, Valli decided to add angelic wings to Krishna and then plonk him in a Garden of Eden-ish space, which is something I’m yet to figure out. It just seemed as though she got bored with the swimming pool and so added the garden.

I suppose part of the problem in the show was the lack of variety. Ironically, when Valli had to be inventive about the shoot in her last Krishna series, she ended up creating a lovely sense of variety. This time, she’s shot in an outdoor location, which is more expensive and more difficult to control etc, but the effect is that the photos lack variation. Also, I’m not sure if it was the lighting in the gallery, but the colours in the pool series didn’t look anywhere as rich as I’d expect. The garden set were more vivid, but I have to admit, I kept thinking of No Doubt’s video of “Don’t Speak”. All in all, nothing in this show really worked for me. If you haven’t seen the first avatar of this concept, then it’s probably beautiful. If you’re devoutly Hindu, this will definitely appeal to you because there’s very little cheekiness in the show. For me, though, I expected much more of story and quirk from Valli.