As if I hadn’t watched enough films over the course of the past week, I went and saw Cloud Atlas today.

(In case you were wondering, I did manage to see three yesterday. And I forgot to add On The Road in the last post.)

Years and years ago, when the publicity for The Lord of the Rings: Fellowship of the Ring was all around us, I remember hearing almost the same questions being raised as the ones that surfaced around Cloud Atlas. The worlds are too intensely imagined by readers to be actualised in a way that would satisfactory. How do you include all the different voices without becoming confusing? The story, for all the fantasy elements, has a strange credibility to it; it’s magical but not implausible — can a film that shows all the curiosities in the story hold on to the idea of being plausible? Bottom line: the film was doomed.

Actually, I was among those who thought The Lord of the Rings: Fellowship of the Ring would probably make a good film. But in case of Cloud Atlas, I was convinced it wasn’t meant to be turned into reality of any sort, even if it is something as versatile as cinematic reality. The novel is a like an incredibly ornate vintage clock — beautifully intricate and all its little parts move in perfect tandem. A lot of people took heart  in the fact that Andy and Lana Wachowski were directing the film along with Tom Twyker. But their Matrix trilogy gave me no hope for Cloud Atlas. Yes, Matrix shows they have an imagination but the second and third instalments also show how much the duo love woo-hoo faux spiritual spoutings. It’s got a Kahlil Gibran effect — reducing everything to forced, wispy poetry — and as far as I’m concerned, that just kills stories. And that’s precisely what happens in Cloud Atlas the film. The magic of discovering the subtle ties that bind the various sub-plots of the novel into one story is totally lost. Instead, the message of all things being inter-connected is like a bloody battering ram that just doesn’t stop. And Tom Hanks’ attempts at doing Irish and Scottish accents don’t help.

One of the book’s greatest strengths ends up to be a massive failing in the film. Mitchell is particularly brilliant at crafting distinct voices that speak to the reader in a way that within a couple of sentences, you know the time that the story is set. From the vocabulary to the sentence structure, everything changes. In the novel, the shifts from one tone and voice to another is great, great fun. In the film, it’s complete cacophony. Plus, the Zachry-Meronym bit is in a dialect that takes some getting used to because words have unfamiliar meanings. I barely understood anything anyone said in that section, and I know the book. If I hadn’t read the novel, I can’t imagine any of it would have made sense.

The best part of Cloud Atlas the film is the music. The score brings to life the music that you can’t imagine because the written word can only do so much. When you realise you’re listening to the surge and trickle of Frobisher’s music as the stories unfold, it’s an epiphany. There are a few scenes in which the film gets everything right, like the scene with the crescendo in the porcelain shop. Frobisher and Sixsmith break plates and figurines and god knows what else, and that shatter and clash is just beautifully shot. That was also the part in which I burst a few blood vessels because, in its infinite wisdom, the Indian censors lobotomised that scene. Why? Because it shows Sonmi and Hae-Joo making love. There may be something with Frobisher and Sixsmith as well. I’ve no clue because the Indian censors think it’s a better idea that I imagine those bits rather than actually see it. As a result, the music gets disastrously, abruptly edited and reduced to unmelodious disharmony. Blech.

There’s also some decent acting in the film. Ben Whishaw is excellent, as usual, and Jim Broadbent is delightful. Susan Sarandon is completely wasted and Tom Hanks has a few decent scenes. Doona Bae is unbearable as Tilda but she’s quite wonderful as Sonmi-451. Predictably, the film looks slick and there are some nifty little tricks. Neo Seoul with its darkness and neon looks fabulously glittery and I liked the way the bleak rooms were transformed into gleaming, well-decorated spaces. But these are silver linings in one very big and grubbily-grey cloud.

The worst part of Cloud Atlas? It’s so bloody Bollywood. First of all, it’s almost three hours long and feels longer. Three hours of the same tropes being used again and again. Karan Johar and Sooraj Barjatya and every other Bollywood director that has forced audiences to give up significant chunks of their waking lives to see interminably long films must be clapping with delight.

Second, we’ve seen scores of Bollywood movies where one actor plays a character who dies, is reborn and this reincarnation looks startlingly similar because hell, it’s the same actor. The Wachowskis clearly haven’t seen those films and possibly thought their idea of making an actor play multiple roles in different time periods was tremendously clever. Cloud Atlas uses the Bollywood reincarnation trick, and adds a shot of steroids. Every actor, from Tom Hanks to Doona Bae, plays three to four characters. Some of these reprisals are entirely unnecessary. Why Halle Berry had to dress like a Punjabi bride for the bit with Tom Hanks as Dermot Hoggins is anybody’s guess. Then there’s Hugh Grant: evil head of a corporation in the 1970s, a slave trader in the 19th century, a Korean sleazeball in the futuristic Neo Seoul, a cannibal with a painted face in the sci-fi bit set in Hawaii, and more. And Grant’s actually one of the better ones as far as transformations go. The worst of the lot is probably Hugo Weaving, who plays six roles including Nurse Noakes. Despite his prior experience in cross-dressing, Weaving as Nurse Noakes is mind-numbingly bad. At times, the re-appearances made me think of college plays in which you have people doing multiple parts because you don’t have enough actors to do all the roles. 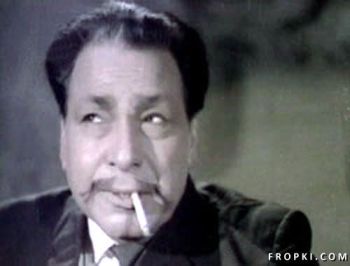 Madan Puri pretending to be a Chinese villain

It’s not that all of the the reincarnations are badly-done. Halle Berry as Jocasta Ayrs is unrecognisable, but that’s one of the rare examples. (The same Berry as the elderly Meronym is so obviously fake.) The reason why this trope gets boring is that it happens too often and flattens all the subtlety out of the characterisation. As far as I was concerned, the truly painful “transformations” were the ones in which non-Asian people were turned into Koreans. The epicanthic fold is tricky business and slapping on some goop on the eyelid does not turn either Weaving or Grant or Jim Sturgess into an Asian. It makes them look like robots. Or like the fake Chinese characters in Bollywood films. Remember Madan Puri in Prem Pujari? Or Aamir Khan at the end of 3 Idiots? He looked more Asian than Weaving or Sturgess. And don’t even get me started on Doona Bae as Tilda. She looks completely weird. Freckles, a wig and weirdly-wide, contact-lensed eyes aren’t enough to turn a Korean into a Caucasian. It was just ridiculous. Watching the Neo Seoul sections of Cloud Atlas was annoying as hell because of the number of fake Koreans.

Jim Sturgess, pretending to be Asian

Is it offensive to do this? I’m not sure, but this yellowface-ing business seems unnecessary when there are so many fantastic Asian actors that one could cast. The characters are not caricaturish but for all the make-up and effects, so many of the critically important roles look utterly fake. How can you not snort with laughter when Jim Sturgess, with a face that looks like its made of dough, is supposed to be a “pureblood” (normal human) and Bae, an honest-to-goodness Korean, is supposed to be a “fabricant” (clone)? Sturgess is the one who looks like he’s come out of a factory.  Unfortunately, it stops being funny after a while and becomes ludicrous and finally, ghastly.