Now that Tom Cruise has taken the time to come and leave obnoxious comments on this blog (see Jack Reacher’s comment in post below. In fact, while you’re at it, do check out Anil Savjani’s attempt at being intelligent too. Poor baby might feel miffed if you don’t), I wonder whether I should retire. Because really, when you write something that’s provoked someone to the point of them wishing you get gang-raped, it’s pretty darn special. This seems like a good time to ground oneself so as to prevent all this misogynist attention get to my head so here cometh an art post.

Like most of my art posts, this is long overdue. I saw it last month (last year, even, if that joke hasn’t run its course for you) but given The Rise of The BROWNationals is still on at Chemould Prescott Road, this is pretty good as far as backlog clearance goes.

If you want to give yourself the heebie-jeebies, you should read the wall text that greets you when you walk into The Rise of the BROWNationals. First of all, it says these are new works by Vishal K Dar “in collaboration with Kaushik Bhaumik and Siddhartha Chatterjee.” Their job descriptions don’t demystify this collaboration much. Dar is a visual artist whose work “displays a playful approach to the use of material, media and technology.” Chatterjee is a “media arts practitioner and anthropologist of design.” I’m not sure what that means but I’m happy to report I had no trouble understanding Bhaumik’s bio: he is a historian, whose focus area is urban and 20th century histories. Now to get properly perplexed, peruse these lines of wall text:

The Rise of the BROWNationals presents to the public a sculptural invocation both organic and digital, of the sensory life in our unconscious of the area in Delhi consisting of the space bounded by the India Gate, Rashtrapati Bhavan and Parliament House. The show follows up from Vishal K Dar’s 2010 show BROWNation at Gallery Espace, New Delhi. … In short, Dar’s BROWNation is an artistic meditation on life in India, a nation people by brown-skinned bodies. The present show returns with new meditations on how the intrinsic tenor of BROWNational life of India provides the occasion to imagine new dimensions of the public unconscious in the digital age.

The show is a somewhat tongue-in-cheek take on the possibilities of a future public art for Indian lifescapes, a ‘hoax’ of sorts. Digital flexibility allowed us to put up fragile Pop Culture effigies in the place of the solid monumentalism of national public art. The effigies mimicked this monumental up to a point but also hoaxed it by content completely at odds with the sacral and serious import of such monumentalism. … We have throughout attempted to seek out the edges of art in an interface with popular culture and in that our project goes back to invoke monumental public art of an earlier modernist era as well as Pop public art of our contemporary times.

… What we thus get is a space of parallaxes created by the overlapping emotional spaces that our media and technology-driven lives place us in. … Contemporary India seems to be prone to ‘visionary parallaxes’, part kitsch melodrama, part Apocalyptic, in the delirium of consumerism.

Impossible as this may sound, the wall text is not gibberish. It only sounds like it. It also succeeds in making The Rise of the Brownationals sound about as interesting as homework, which is a shame because actually, it’s a clever show that’s loads of fun whether or not the above sentences make any sense to you. 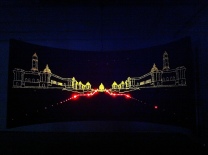 Landing Strip, The Rise of the BROWNationals

The Carousel of Dharma, The Rise of the BROWNationals

Get past the unnecessary capitals and the wall text of The Rise of the BROWNationals, and it’s a perfectly approachable and accessible show that presents some of the best known sights of the Indian capital: India Gate, the presidential residence and the Secretariat buildings (popularly known as North and South Block). These are symbols of India’s political identity. This is where the powers that be do their thing and The Rise of the BROWNationals turns them into objects of amusement. They are illusions and filled with incongruities. “Landing Strip” shows Raisina Hill, where there was violent rioting recently and is otherwise the place of parades and fanfare during national holidays. The president’s majestic home and the Secretariat buildings are shown in outlines that are made up of twinkling yellow and red bulbs. It looks almost like the decorations you see on the streets of Kolkata during Durga Puja. At the same time, there’s something ominous about this piece, particularly given it’s called “Landing Strip” and there are little red lights, like those we see on runways, on the path leading up to the presidential residence of Rashtrapati Bhavan.

“The Carousel of Dharma” is digital animation that shows the Parliament building. It’s a neat little installation which shows a miniature model of the building that whirs and clicks while revolving and it’s through this that the image of the Parliament is projected on the wall. Again, the clicks give this work a hint of the ominous. It’s as though we’re listening to a countdown. Plus there’s the whole nudge-nudge-wink-wink thing about the Parliament being something of a circus. “Girl on a Swing” is one of the few titles that doesn’t try to be clever. It’s literally a girl on a swing and the swing is hanging from India Gate. It’s a bit chilling to see a girl cheerfully swinging at India Gate given that was where so many people gathered in support of the woman who was gang-raped in Delhi. This, of course, is a layer that the artists could not have anticipated. Ignore that aspect and it’s one of the sweetest and most playful works in the show. Do you expect to see a swing dangling from India Gate? No. Is anyone else bothered by this? No. So instead of the sombre flame for the anonymous soldier, what you have is a live woman, enjoying life.

I think my favourite piece in the show, though, was “The Fountain of Transformations”. This is a looped video projected on a wall. At first glance, it’s just a simple projection. But actually, there’s a projected bit on the wall. Essentially one part of the fountain seen in the video is projected upon three-dimensional sculpture, rather than flat surface. Look carefully, and you’ll see the figures in the projection get a little bit warped. That’s not all. From time to time, a figure emerges from the fountain’s water. Most of the figures are men. One, however, is a man dressed like a monkey. Super fun and generally, a good show.

4 thoughts on “The Rise of the BROWNationals”