Untitled, by VS Gaitonde. From the Christie’s Facebook page.

On December 19th, 2013, Christie’s held its first auction in India and the results of the sale made news because a new record was created when an untitled VS Gaitonde painting fetched $ 3.7 million (a little more than Rs 23 crore). This is conveniently timely, since there’s a Gaitonde retrospective coming up at the Guggenheim in New York.

The major attraction of this sale, however, was that it put up for grabs a large number of paintings from Kekoo and Khorshed Gandhy’s art collection. The Gandhys passed away recently and it seemed kind of jarring to see their collection being broken down so quickly. When the works were actually being auctioned, I felt really uneasy. The bidding was so insanely frenetic, it felt like hawks swooping in on prey.

Though it made sense that people were devouring the lots because there were a few beautiful works in the sale, some of them from the Gandhy collection. A Ganesh Pyne that became the most expensive Pyne painting was chilling but beautiful. One of KH Ara’s charming vases with flowers was on sale. I was quite delighted by a set of prints by Laxma Goud that showed crazy, fantastical, horny animals. But if there was ever any doubt that I don’t have the eye of a collector, the fact that that particular Gaitonde (not from the Gandhy collection) was the top scorer at the Christie’s auction is confirmation.

For a couple of days  before the auction, Christie’s had a “preview exhibition” with all the works on sale at the Taj Mahal Hotel in Mumbai. The moment you entered the area that they’d taken over for the auction and exhibition, the first thing you’d most likely see was the Gaitonde. It’s large, brightly-coloured and it was bang in the visitor’s line of vision as they walked in.

I spent about two minutes (at best) with that Gaitonde. Much of those two minutes were spent thinking how I like his ink and watercolour stuff (see the Guggenheim link given above for an example) better.

In one corner of the large display area, however, was a painting that I stood and stared at for so long that the Taj security started hovering around me. It’s the Black Landscape by FN Souza.

Black Landscape is like an epiphany. From a distance, it just looks like a big, black rectangle. Even when you come closer, it doesn’t offer much more. At best, you’d notice it’s an oil painting.

Yes, it’s a crap photo. Taken on my phone. But as unphotogenic paintings go, this one’s right up there.

And then, when you’ve reached that perfect distance, the painting suddenly reveals itself. It is, as the title promises, a black landscape teeming with perfectly-camouflaged details. The thick, strong strokes of oil paint are unmistakably Souza’s. Except here, in almost unrelenting monochrome, the lines that are usually bold and brutal become more subtle and strangely … fragile because of the lack of colours and contrasts. The impasto creates a sort of embossed image, black on black. It’s like the image is a secret with which the painter is trusting you, the viewer. Keep staring at it, and it rewards you. Near the top corner, there’s Souza’s signature. Speckling the darkness is colour — red, orange blue. As though there’s a gloriously colourful world that has been shrouded with this blackness. Little by little, your eye gets attuned to what he’s done on that canvas. Once that happens, you wonder how you could ever ever have thought this painting is just a big, black rectangle.

Black Landscape is absolutely exquisite. Stare at it long enough and it seems to pull you in, like an enchanted object; like the wardrobe that took C.S. Lewis’s kiddie heroes to Narnia. Except, of course, it’s not Narnia that Souza will transport you to, but a darker, more secret-heavy world. I’m not sure if all that blackness is frightening, but it definitely feels incredibly tense as you keep looking at the painting and wonder what else is hidden in there.

Probably because it looks like nothing more than a black rectangle from a distance, when I was there, not many of the visitors paid it much attention. To me, though, the dense, thick darkness felt almost magnetic.  When I was finally able to bring myself to leave this painting — the Taj security were right to hover. If I could have stolen that painting, I would have — I decided to look at the label, just in case it gave something away about the owner. (It’s not part of the Gandhy collection.) It said, “Property of a distinguished Parsi gentleman.”

Not just any gentleman or any Parsi, if you please. A distinguished Parsi gentleman. Bless!

I was sighing about this beautiful painting to a friend who told me that in October 2013, London’s Grosvenor Gallery actually had a Souza exhibition made up entirely of similar black paintings. Ever since, I’ve been wishing I had a time travel machine because really, to see that exhibition would be magical. A little unnerving, perhaps, but still magical. 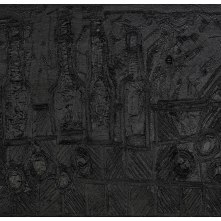 All these images are from Black on Black, the Grosvenor Gallery show. There are more works, which you can see here.

I think of those paintings and I think of a moonless night — its smooth, unbreakable lack of colour; and moulded out that dense, rich flatness are outlines of objects that range from still life to a landscape.

Paintings rarely translate well into photography, but these paintings in particular are impossible. Flattened, compressed and reduced to being viewed from just one angle, the beautiful, dark trickery of Souza’s black paintings escape photographs. They really, truly need to be physically seen. Still, I’ve mulishly gone ahead and put up those images, partly because having seen one of the I can sort of imagine what they’d actually look like (or so I’d like to believe). It might look like black goop to you, but for what it’s worth, just try imagining the gloss of rich, black oil paint revealing these lines to you and the images shimmering out of the darkness-soaked canvas.

Fittingly for a series of paintings that are so mysterious, there’s next to nothing known about them. All we know is that they were painted in 1965. This is from the Grosvenor Gallery press release:

What motivated Souza to embark on such an uncommercial and difficult project we do not know. However we do know that prior to this exhibition he was at the height of his fame and had museums and major collectors seeking his works. … Regardless of what we can read and the various ways of interpreting the works the primary reward is the experience of seeing them in real life. They require patience and concentration but once the eye catches the forms and texture the image emerges, and we suppose that is what Souza wanted us all to do, was to stop and look at the works.

Christie’s had a few little snippets by Souza about the series of black paintings. In their notes for Black Landscape, there’s a little quote from a Souza interview:

“I did a series of black paintings. These were done only with one color, in black, or rather in achromatic, because black is not a color. Light made the markings in the black paint visible. Recently I did a series of paintings only in white. They have never been exhibited.”

I love the word “achromatic”.

There were also a few lines from a diary entry:

Diary: 23 October 1975
These last couple of days in Karachi (I’m leaving for Delhi on the 25th) I did 10 small oils: 2 mosques – the first: Red Mosque was bought by Wahab; a still life (flowers); a head, in Memory of Shakir Ali; two landscapes, one standing nude, and three unusual paintings all in white titled Begum, Mosque and Still life. These white paintings correspond to the Black paintings of 1965 – exactly 10 years later – like anti-matter. They are interesting, if a little too mysterious. I don’t care for mystry [sic] in painting, my own mystique as a person yes, mystique being a fancy name for legend, but the mysterious in art can result in a lot of sham and charletanism [sic]. The plastic quality of art precludes mystry which could be “shrouded” ambiguous and foggy.

None of this throws any light on the black paintings, though now I’m rather curious about the white paintings.

I’m not sure why, but it somehow gladdens my heart to hear the Black Landscape was ultimately withdrawn from the Christie’s sale. (I didn’t stay till the end. I saw Gaitonde’s record-breaker-to-be being auctioned and then left to eat a massive dinner.) Which means that we all got to see it, but Black Landscape remains here, in our midst but out of sight — like the details  the painting — as the property of a distinguished Parsi gentleman.